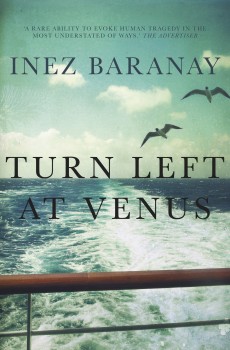 Ada Ligeti writes groundbreaking science fiction as the anonymous author A.L.Ligeti. Turn Left At Venus includes chapters about Ada’s life, from an immigrant childhood with the friend who keeps turning up, as Ada becomes a writer always on the move, from the suburbs to Kings Cross to San Francisco, Ubud, Rome, other cities… always moving on, creating a life devoted to writing, exploring desire, identity, the love of women and the lover of her old age. There are also chapters from Ligeti’s various novels; chapters where fans discovering her work argue about it on online forums and discussions; chapters where the queer tribe her work has brought together are able to create the ending to life Ada described as ideal.

In the 1930s, Ada and Leyla meet as children on a boat bringing migrants from Old Europe to the new World. They talk of seeing kangaroos yet end up living miles apart from each other in suburban Sydney. Their separations are often lengthy but their friendship endures across continents and decades and is a threat in the haunting story of writing, relationships and ageing. Ada (A.L.Ligeti) becomes an author, searching for a Utopian world, exploring aspects of patriarchy and gender in her groundbreaking feminist science fiction novel called Turn Left at Venus. That novel and its sequels are celebrated and much discussed by generations of fans. Memory and imagination fold seamlessly into one another as Ada keeps moving on, from relationships and places, living in hotels and rental spaces in Kings Cross, San Francisco, Ubud and elsewhere.

Baranay’s emotionally resonant portrait of the solitary and artistic life, lived adventurously across space and time, triumphantly celebrates the singularity of being, of age, of imagination, of the ‘getting ready’ for the ending that life demands.

‘A gripping treaty at the crossroads of fictive biography and speculative fiction about what it means to become old. Nothing is left untouched, unexplored. The life of the mind and the life of the body, inner space and outer space. It is a complex, magnificently written novel that replicates the way in which lived life and imagined life keep feeding each other’ — Arianna Dagnino

A detailed, insightful reading of Turn Left at Venus by Harper Boon and Leigh Dale can be found at Vol. 22 No. 2 (2022): JASAL [link has link to PDF] https://openjournals.library.sydney.edu.au/JASAL/article/view/17118
The abstract reads:

>>The work of Australian writer Inez Baranay is read in the light of Stephen Orgel’s assertion that ‘If readers construct books, books also construct readers,’ and a parallel remark by Elizabeth Webby, that the ‘life/fiction opposition is too simple: the values people act upon in life may, in fact, be derived from novels they have read.’ While making some reference to Baranay’s career as a whole, our focus is the 2019 novel Turn Left at Venus (2019), a structurally complex book about a (fictional) writer of science fiction whose most renowned work is titled Turn Left At Venus. The essay argues that, in reflecting on the making of literary values among those in the book industry, in scholarly environs, and general readers (particularly fans), reading Turn Left at Venus prompts questions about the role of gender, sexuality, cultural and linguistic difference, travel, and genre, as they shape the valuing of books and writers in Australia. <<

Published by Transit Lounge in October 2019

Reviews and interviews will first appear in the NewsBlog on this site, then on this page.

First print review appeared in the Canberra Times. It says “… Readers willing to let go of their own expectations and relinquish control open themselves to an unusual and rewarding reading experience. /This is a book of many pleasures: music, literature, visual art and sexuality swirl in and out of focus. /Baranay’s evocation of place, including locations such as Bali and Kings Cross, are written with a sensuality that grounds the reader in the physical, a useful thing given the novel’s metaphysical preoccupations …”   Read the full review here

Why did I write Turn Left At Venus? I answered that question here for Bookloverbookreviews.

Text of this review:

Ada’s first name is pronounced ‘‘ardour’’ and her professional name as a writer is A.L. Ligeti, which at once erases gender and indicates a nod to a fellow-artist, the composer Ligeti. Ada is in the last stretch of her life, surrounded by people who know her work and are preparing to give her an appropriate send-off, and her memories swim through her elderly consciousness taking various narrative forms. Inez Baranay’s metaphysical concerns are given substance by the intense physicality of her settings and characters. Always an imaginative and intellectually uncompromising writer, using a broad canvas in her work that stretches across the world and beyond the bounds of the human, Baranay combines realism and speculative fiction in this tale of women’s friendships, the life of art, artificial intelligence, and the limits of ageing.

(scroll down to view at)  https://www.smh.com.au/culture/books/fiction-reviews-cilka-s-journey-and-three-other-titles-20191217-p53kvl.html