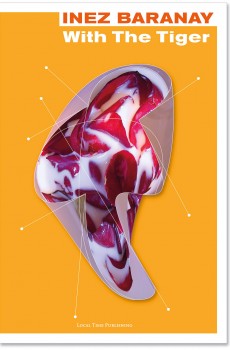 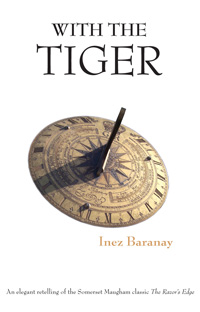 Scroll down for news of new paper edition.

Larry Darrel, an Australian teenager, goes on a backpacking trip to India and finds his life changed for ever; he will return to India many times over 20 years seeking the meaning of chance and death. Back home he refuses the opportunities and privileges of his former life and breaks up with his fiancée Isabel. His new life affects those he left behind, including the narrating character Will Maugham. And Isabel will stop at nothing to get him back, even though their lives move further and further apart.

With The Tiger is a contemporary re-writing of Somerset Maugham’s novel The Razor’s Edge. Set against the backdrop of the Great Depression, The Razor’s Edge, a novel published in 1942, is said to have begun the craze for “Spiritual India”.

With The Tiger is set 60 years later, the story of one Westerner’s search for meaning in India and also a social history of the 1980s and 90s.

The novel was acclaimed by reviewers and critics in both India and Australia. Scroll down for reviews.

Published by ARCADIA, an imprint of Australian Scholarly Publishing Pty Ltd., in association with Press On in 2010.

Ebooks With The Tiger is available as an ebook from Smashwords.com, Amazon and usual ebook sellers.

HarperCollins India edition out of print; you might find copies online.

Press On/Arcadia edition in some Australian bookshops or contact the publisher aspic@ozemail.com.au

Also available at Amazon and other online booksellers.

It takes its impressions from the master storyteller but its location in a different time and place allows for a fresh interpretation of the Westerner’s experiences of India. The Asian Age (India)

Inez Baranay is very correct and vivid in her portrayal of India’s flavours of vadai, coffee and the music season. She exposes the experiences India offers foreigners seeking ‘nirvana”.Deccan Herald (India)

With The Tiger goes some way  in destroying the notion that classics are best left untouched. There is no questioning her ability as a writer of prose and a storyteller. …[A]s Elliott would have put it: “My dear, I wouldn’t miss it for all the jade in China.” DNA (Mumbai)

A racy read, this is a worthy addition to your literary vocabulary. Sahara Times (Weekly)

This interesting, satisfying and revealing work of fiction is as much about the process of writing as the product of writing, or the story itself … Irina Dunn, Quadrant (Australia)

Inez Baranay has embarked on a rather audacious venture in this riff on a classic novel by a somewhat neglected author. … . Mind you, it works and I think she has pulled it off well, difficult as it might seem. Perhaps the secret is that instead of just loosely basing the book on the Maugham original, she has followed it quite closely and this makes it more convincing and something of a tribute. Phil Brown, Brisbane News